The Prince and the Painter 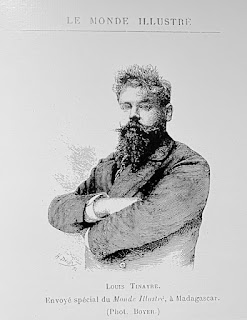 I nearly missed this year's summer exhibition in Salle Antoine 1er, and you will too if you don't hurry. Le prince et le peintre - Albert 1er et Louis Tinayre, une amitié a la découverte du monde (1904-1922) has been on since mid-July and ends 11 September. It contains several items normally on show in the Oceanographic Museum, as well as loans from the Palace Archives and various institutions around France.

Louis Tinayre's life (1861-1942) was one of upheaval and adventure. Born in Auvergne, he was forced to flee to Hungary aged 10 after his mother was involved in the Paris Commune and his father was mistakenly executed. He returned to Paris nine years later, having graduated from the Hungarian University of Fine Arts.

Tinayre employed his skill first as a documentary illustrator, reproducing newsworthy scenes of real life. By 1895 he was working for Le Monde Illustré, and when the French government sent a military expedition to Madagascar that year, the newspaper sent Tinayre with them as a special envoy. Many of his sketches and photographs were later converted into engravings and paintings and presented at the 1900 Exposition Universelle de Paris. It was here that Prince Albert 1er of Monaco discovered Tinayre's work and was so impressed that he persuaded the artist to join him in 1904 on an oceanographic expedition. It was to be the beginning of a long and fruitful partnership.

The exhibition is organized chronologically with brief explanatory panels.

Three examples of Tinayre's early work stand out. The portrait of his mother Victoire Tinayre (1880) depicts a woman I would not want to cross. His realist L'aveugle et son chien dans une rue parisienne (1885) portrays a blind man, the sole of one shoe split, his dog, and a glimpse of the Pantheon in the background. It was exhibited in the Paris Salon. Another large oil painting of a ceremony catches my eye because of the use of gold paint on its subjects' military uniforms. I have to get up close and view it from the side to be convinced that the tiny buttons and kepi peaks are not three dimensional. 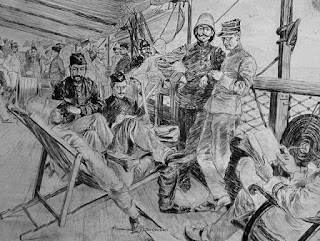 Of his illustrations, drawings and engravings of the Madagascar expedition En route pour Madagascar - l'après-midi à bord du Yang-Tsé (28 Mars 1895) catches my eye because a couple of the soldiers stare out of the image. It's a technique that's repeated in several of the following pictures and has the effect of inviting me into the artist's world.

Traversée de la forêt d'Anamalazotra (1898) is an oil on canvas which shows explorers being carried in chairs through the jungle, a reminder of France's colonial history. The flora looks tropical, with creepers trailing from the trees. In what appears to be a preparatory drawing there's a crocodile that didn't make it into the finished painting.

In 1904, on his first oceanographic expedition with the Prince, Tinayre's oils capture six scientists lounging on the ship, A bord de la Princesse Alice, les savants du laboratoire (1904), two of them looking disinterestedly towards the artist. The information panel notes "on perçoit une certaine parente avec les impressionnistes, en particulier Manet", and I'm reminded of the bold stares of many of Manet's subjects. Another oil, Açores. San Miguel. Débarquement sur l'îlot de Villafranca (ancien cratère) (1905) is fascinating more for its depiction of an impressive volcanic crater than for the artistry.

Tinayre's portraits of the ice-master wearing mittens on the Princesse Alice, and the Scottish whaler Wedderburn, steely-eyed, gripping a harpoon are souvenirs of Prince Albert's Arctic expeditions, but both men stare into the distance and don't engage me. 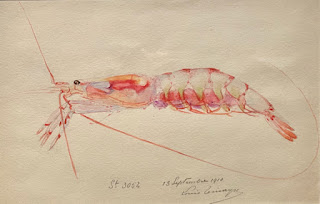 At this point in my meandering the exhibition manager comes over to chat. She recommends the detailed watercolours of sea creatures, 13 Sep 1910. They are indeed exquisite and astonishing when I learn they had to be completed at speed, before the creatures' colours disappeared on contact with the air. The manager also tells me to look out for the Messe de minuit - Noel 1914 dans les carrieres de Confrecourt, Plateau de Nouvion, in which every man portrayed in the image was able to recognise himself. 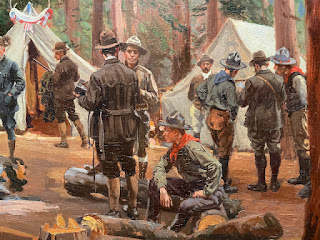 For local interest there are the 1917 Grottes de Grimaldi (secteur oriental), an undated view of Eze-sur-Mer (Cap Roux), and a photograph of one of the scientific ships moored on Quai Antoine 1er. But the most surprising discovery is towards the end of the exhibition. It is a 1919 painting labelled le Prince Albert 1er de Monaco et Buffalo Bill, both men sitting tall on their horses, backed by fir trees and mountains. What did they talk about? The 1913 Camp Monaco in Wyoming, USA, in a forest clearing draws my gaze for longer tho', with another couple of men staring at me out of the canvas. Who are they? What are they thinking?

Overall, Tinayre's landscapes are the least interesting works and his portraits, tho' fine, are too formal. His scientific studies of sea creatures are beautiful, but his pictures of groups of men, whether relaxing, working, or in formal assemblies are vivid and fascinating. The exhibition allows you to stand inches from them and study their detail. I asked the exhibition manager if these artworks usually hang in the Oceanographic Museum and she nodded. However I urge you to see them in the Salle Antoine 1er while you can because, as she said, in the museum they are hung so high on the walls that you will miss them.