In the run up to Christmas I read three more of the books that have been sitting on my shelf for years. They're all novella length and each one features a creature alongside a human. Ernest Hemingway's The Old Man and the Sea (1952) recounts a lone man's struggle to land a fish, George Mikes's Tsi-Tsa (1978) charts the writer's relationship with a cat, and Barry Hines's A Kestrel for a Knave (1968) relates how a bird of prey lifts a boy out of misery. 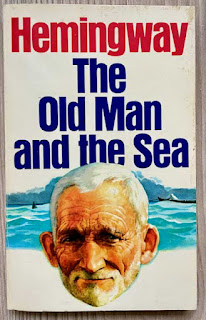 Hemingway is the most well-known and feted of the three authors, indeed The Old Man and the Sea won him the 1954 Nobel Prize. His work is stuffed full of fighters and hunters, and in this one we go out with Santiago, "an old man who fished alone in a skiff in the Gulf Stream and he had gone eighty-four days now without taking a fish." Santiago sets out to break his run of bad luck and hooks the biggest marlin he has ever seen. For three days he struggles alone, talking to himself and to the fish for which he has great respect. As Santiago says, "I am only better than him through trickery".

Before starting it, I wondered just how engaging the story of one man's fishing expedition could be, but Hemingway's writing has a simple, lyrical quality that keeps you reading. He makes you feel you're sitting in the boat with Santiago, bobbing up and down on the waves. 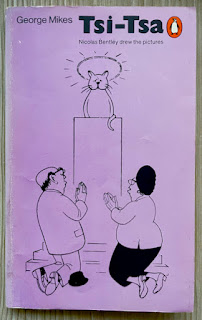 Tsi-Tsa is, as its subtitle states, the biography of a cat. Our eponymous puss adopts journalist and writer George Mikes, whose previous relationship with animals "did not come to much", and who had "made fun of British cat-worship for several decades". Completely unawares tho', he "fell for Tsi-Tsa in the grand way".

This is a story filled with humour and affection and was bound to appeal to someone like me, who loves cats. It's also rather philosophical. Mikes questions whether it would be better to be blind or deaf, and asks if we do or should "value human beings, however hateful, above all animals, however lovable?"

The Hungarian-born writer was new to me. He studied law, was sent to London to cover the Munich Crisis and never left. I doubt I'll search out another of his books even tho' I really enjoyed his conversion to cat-worship. He ends on another philosophical point: "'Cats come and go. Cats are born and die, leaving little trace behind and very few memories. What does it matter whether they live or not?' How true. Cats, in this respect are just like human beings." 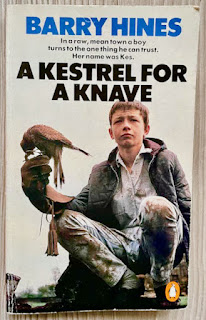 I was already familiar with the third book, A Kestrel for a Knave, since years ago I'd seen the 1969 screen adaptation by Ken Loach. It portrays a teenage boy's life in 1960s Yorkshire, is sometimes darkly comic and often utterly bleak. Billy Casper is in his last year at school and in spite of a potentially good salary, insists, "I'm not goin' down t'pit". But what else is there for him? He's used and abused by his older brother Jed, regularly caned by his headmaster, and mistreated by his sadistic games teacher. His mother is uncaring, his father absent. Unsurprisingly Billy himself is no angel, not averse to filching items from the milk dray and reading The Dandy before delivering it on his paper round. For all the hardship that Billy suffers, he can always find escape in the company of his kestrel, Kes, out in the countryside that lies beyond his back yard.

Hines deftly contrasts Billy's home life with his sense of wonder and freedom when encountering nature. In one memorable description, the teen walks through dew drenched grass and bends down to touch an individual drop with the tip of his tongue. At the end of the book one hopes, if not senses, that Billy will survive.

So there you are, three excellent reads: Hemingway for literary merit, Mikes for entertainment, Hines for emotion.
at January 23, 2023 No comments:
Email ThisBlogThis!Share to TwitterShare to FacebookShare to Pinterest
Labels: Book reviews, fiction

So. Farewell then Stars n Bars 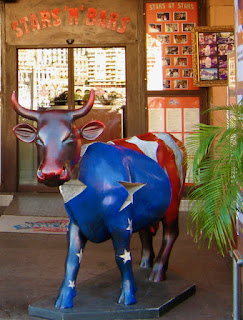 2023, the start of a new year and the end of an era as it sadly heralds the closure of Monaco's Stars n Bars on 27 January, thirty years to the day since the American diner opened.

So many memories have been made there! We've had rowdy meals with friends and convivial drinks at the bar. And all the events! The first floor venue, Stardeck, has great views over Port Hercule, and if you've been in Monaco as long as me, you'll remember it as Fusion. It hosted the Riviera Comedy Club where the Other Half and I saw Isy Suttie in 2009. And what about all the networking evenings? You never knew who you'd meet. One time we were just about to leave when an Australian couple came over to say hello and we ended up having dinner with Mr Nightclub of Melbourne. Monaco's musicians entertained us at Open Mic Nights, we watched Barack Obama's inauguration and SuperBowl streamed live on TV, and at one memorable quiz night we were joined by a Monaco VVVIP.

Here then is my tribute to Stars n Bars for all the great times I've had there.

Stars n Bars, we must say our goodbyes.
Adieu! No more burgers and fries.
Thanks for thirty great years.
Cheerio, ciao and cheers!
From the ashes a phoenix will rise.