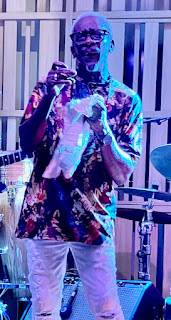 Who would've thought that those of us who've qualified for a bus pass would be exchanging tips about music with millennials. The kids are now interested in artists from the 60s, 70s and 80s, since our music has been in the charts (Kate Bush), and our artists have played at Glastonbury (Paul McCartney and Diana Ross). In Monaco too Jeff Beck is opening Monte Carlo SBM's Summer Festival, 9 July.

Well, here's a tip for you, whether you're a millennial or a boomer or anything in between. Go and see Junior Giscombe, aka Junior of Mama Used to Say (1981) fame. Last weekend he was on stage for two nights only at Note Bleue,
Read more »
at June 30, 2022 No comments:
Email ThisBlogThis!Share to TwitterShare to FacebookShare to Pinterest
Labels: Art & music & misc reviews, concerts, music

Not a woman who bears grudges?

I didn't have high expectations for Sarah Haywood's The Cactus. Goodreads places it in the Chick Lit category, and it's been described as endearing, heartfelt and charming. Reese Witherspoon chose it for her book club, and like 'Where the Crawdads Sing', which was one of my most disliked books of the past couple of years, intends to adapt it for the screen.

The story is narrated by its protagonist, Susan Green, who in the first sentence of the book describes herself as "not a woman who bears grudges, broods over disagreements or questions other people’s motives", which implies that she most certainly will do all of those things in the following pages.
Read more »
at June 07, 2022 No comments:
Email ThisBlogThis!Share to TwitterShare to FacebookShare to Pinterest
Labels: Book reviews, bookclub, fiction
Newer Posts Older Posts Home
Subscribe to: Posts (Atom)