Our pockets not picked in Paris

This is a true story. The events described took place in Paris in 2018 and are narrated by The Man. Sometimes he thinks he's in a Philip Marlowe novel. 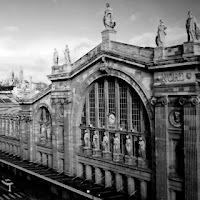 It was about eleven o'clock in the morning, mid August, with the queues not moving and a look of resignation on the face of The Dame. I was wearing my navy-blue long shorts with leg pockets, white polo shirt, black sandals and no socks. I was cool, clean, bearded and sober, and I didn't care who knew it. I was everything the well-dressed traveler ought to be. I was crossing the City of Lights.

The hall of the Gare du Nord was busy. Against the wall there were only four ticket machines for an army of travelers loaded down with cases and backpacks. I stood there and thought that if I ran that station, I would sooner or later have to install more machines.

There were plenty of gates opposite, beyond them a wide gallery and all the time crowds swarming this way and that. Large signs on pillars pointed left and right, and down steps leading to the metro. I was still staring at the coloured arrows and symbols when The Dame touched my arm.

"Here's your ticket," she said.

It was a piece of card no longer than my pinky and twice as wide. I fed it into the barrier and ducked down the first stairwell on the right. At the bottom there were red machines with racks of soda pop and potato crisps. A diagram of the line confirmed our destination, Gare de Lyon. It was just two stops along. A flashing display showed the wait time: seventeen minutes.

"Hang on, not so fast!" The Dame was always a little slow.

"How do I know where we're supposed to go if you don't give me time to look at the maps?"

She rolled her eyes and pouted. She was pissed off.

I led her a couple of yards down the platform.

"Don't make it obvious, but see that guy talking into his phone? Thickset, cropped black hair, shifty looking, with the white ear-buds and wire? He's watching us, and I don't think it's because he likes my chiselled good looks."

She glanced over. "The one wearing the short-sleeved black and white Nike top?"

"That's him. See how he doesn't move his hands? His eyes are flat too, like a new plastered wall, and he flicks 'em over to us then flicks 'em away again. I'm no lip-reader, but I bet my next beer he's describing us to his colleague on the other end of the line."

"You mean we're his marks, like when they picked your pocket in Majorca?"

The flashing display showed the wait time: ten minutes. I strode away from the crook and The Dame followed. We must have looked odd standing with our backs to the tracks, but the interesting stuff was on the platform. Within a minute the guy had moved to a spot where he could observe us again. We waited. A couple of shady characters with the same white antennae ambled over, stopped and leaned against the wall. They pretended to not watch us. I nodded at The Dame and she led the way back to the bottom of the stairwell. A moment later the thugs were on our tail.

With two minutes to wait, unsuspecting chumps had filled the platform, and the crook snaked through them to its edge. He intended blocking the doors until his mobster gang had rifled through every pocket. I clocked an eyeful of his ugly mug as the train rumbled in, then he turned and stood like a Colossus, impervious to the crowd jostling to get past him. The Dame and I held back as an irate old codger shouted, "Avancez, avancez!" I wondered how many wallets and purses had disappeared in the melee.

The door to the next carriage was free and I pulled The Dame towards it and pushed her through. It was hot and sticky and she stood catching her breath, thinking we were out of trouble's way. A nice, clean-cut boy offered her his seat and she sat, hugging her bag like a punched gut.

The thickset crook was nowhere to be seen, but a man who might have been his cousin squeezed through the bodies towards us, carrying a paper cup of coffee as if it were a loaded gun. 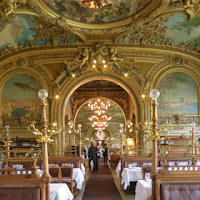 "Now why d'you think a man would bring a cup o' coffee onto a packed metro train?" I asked The Dame.

I was not looking for an answer. Why else but to spill that coffee onto a chump whilst a hoodlum lifts his wallet? I kept my eye on him until he knew I was onto his game. There was nothing to do now but wait.

It was about midday, mid August, with our pockets not picked and before us, a menu of fine wine and fancy food in the Train Bleu. The Dame was wearing her patterned white dress and it looked well on her. She laughed at me with her hazel-green eyes and raised a glass to her smiling lips. After lunch we would board another train, heading south to where the warm sun shone in the clear blue sky.

My lack of imagination?

This is a review of the first 13% of Harmless Like You. Perhaps it's a good story. It was in a list of books I'd found on the theme of family relationships. It was shortlisted for a few awards too. The two main characters are Yuki and her son Jay, whom she abandoned when he was 2 years old. I found it mostly unreadable.
Read more »
at January 17, 2022 No comments:

Art Objects is a book for readers who relish language, the sound of it, its rhythm. In other words, the art of the written word. In it Jeanette Winterson explores the idea of literature as art in a series of essays, using examples of the literature which she admires: the modernists, especially Virginia Woolf and Gertrude Stein.

I did wonder if I'd get much out of the book, since the only reading I have in common with Winterson is Woolf's Mrs. Dalloway, Winterson's own books, and Shakespeare. But I didn't let it put me off, and neither should you. This is a book that oozes love of literature.
Read more »
at January 08, 2022 No comments:

The worst of times

In simple terms, Autumn is about the relationship that develops between a 9-year-old girl called Elisabeth, and her elderly next door neighbour, Daniel Gluck. There's a lot more to it than that tho'.

It's a book firmly set in its time, that of the UK post-Brexit. Lack of funds for community services have led to libraries being closed, the way the Brexit referendum was framed has led to thoughtless tribalism, and the idea of protecting the land from invasion by foreigners is rife.
Read more »
at January 06, 2022 No comments: