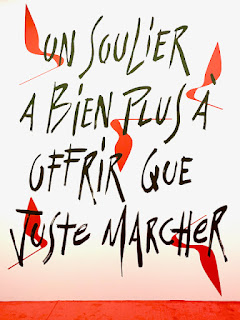 Make some time to see the Christian Louboutin exhibition before it closes on Sunday 28 August. I always find something interesting at the Grimaldi Forum summer shows, and this year is no different.

The official blurb calls it a "celebration of art through the wise and joyful eyes of contemporary designer Christian Louboutin". It's not just about the shoes then, plenty of which are on display. There are also examples of artworks that have inspired him, as well as collaborative projects with artists he admires.

I admit I went in with some prejudices. The idea of the shoe as a work of art is a load of cobblers, isn't it? I also dislike the idealisation of high stilettos as something women must wear to be feminine, gorgeous, well-dressed. It is a truth universally acknowledged by women, men and institutions. Remember when the Cannes Film Festival turned away women wearing flat shoes from a red carpet screening in 2015? 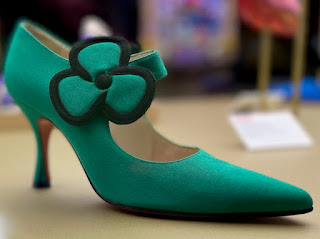 But of course, Louboutin shoes aren't all stilettos. The exhibition route starts with the designer's early creations, which are pretty and appear to be wearable, even if they don't always look comfortable. My favourites are the Pensée shoes. Princess Caroline wore a pink pair to the 1995 Rose Ball. I also like the relatively flat and sturdy Toro with its patent leather bull-horns, and the white, kitten-heeled 100 Mètres, definitely not to be used for running.

Next, Shadows introduces us to the idea that the "art of shoe design comes from a mastery of drawing and illustration". Hmmm. Is it disingenuous to say that Louboutin's work is 'craft' rather than 'art'? My prejudices raise their heads again. The designer's Nudes series, we're told, is "a strong - or even political - cultural act". I'm just exasperated that "lengthening the silhouette" of a woman's leg is something to which we ought to aspire. Let's move on. 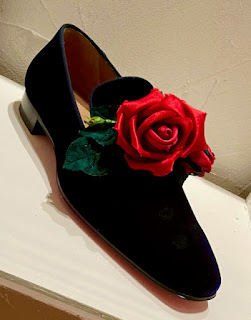 I like a bit of sparkle and am entranced by the Hall of Treasures, especially the Under the Sea-Strass exhibit with its sunken chest of jewel-encrusted shoes. I also envy the Casano shoe for men: black velour with a satin red rose. An artwork created for the exhibition with Imran Qureshi stops me in my tracks too. It shows blood-spattered walls and a pair of men's shoes covered in gold-leaf, loose patches of it flickering in the breeze.

In Workshop & Craft, the shoemaker's skill is demonstrated with humour, as a miniaturised, cartoon-like Louboutin larks about in a series of explanatory videos. It's here that I began to perceive the designer's sense of fun. Next, Suggestion & Projection contains an imagined British granny's chintzy sitting room. The introductory video tells me to take a closer look at the patterns on the wallpaper, fabric and carpets, and claims that all similarity with the work of French photographer Pierre Molinier is intended. In the words of risqué British comedian Frankie Howerd, "Ooh er Missus!". I knew nothing of Molinier before the exhibition. His Wikipedia entry notes his epitaph: "Here lies Pierre Molinier, He was a man without morals".

The Imaginary Museum section holds my attention longest. It recognizes the "artists and artworks that have been Christian Louboutin's constant companions since his teenage years". There's plenty here for the curious art amateur: a Helmut Newton nude, a towering headdress of feathers and pompons worn by Josephine Baker in Monaco in 1974, a Wedgewood medallion of a slave with the motto "Am I not a man and a brother?", a mural by Gilbert and George, a fresco by David Rochline, a turquoise sculpture by Marlene Hartmann entitled My Inner Beast (2017), Two Foot Flowers (1964) by Andy Warhol. 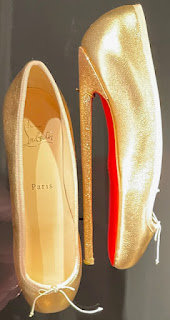 We're reaching the end of the exhibition now, and I'm faced with two unnerving sections. First, a display of work by British pop artist Allen Jones. Regardless of his stated intention to "challenge the cannons of figurative art rather than to objectify the female sex", Hatstand (1969) is nevertheless a fetishised representation of a woman as a household object. Far easier to view are his sculptures which are animated by moving light. Moving on, the Fetichism section contains images from a 2007 collaboration with filmmaker David Lynch. Photographs portray models wearing nothing but Louboutin shoes, designed so that they cannot be used for walking. The women are rendered immobile, shackled by the footwear.

Humour and lightheartedness return in the final section, Pop Corridor, where two videos caught my eye. First, Beyoncé's Super Bowl halftime show in which she dances in a pair of chunky Louboutin boots (I googled it - they cost $1295, whereas her backing dancers wear $160 Doc Martens). In the showcase opposite, Kristen Stewart poses on the Cannes 2018 red carpet before removing her Louboutin heels in order to walk into the auditorium. It's a protest against the festival's dress code and takes me full circle, back to that exasperation with the glorification of the stiletto-heeled shoe.