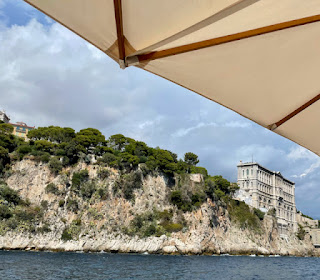 It was Friday morning and I was texting an old friend in the UK I hadn't seen in ages.

And, it got me thinking. I can't remember the last time I had massive prawns in Monaco, or even smallish ones for that matter. Something had to be done.

"Where can we go for massive prawns?" I asked the other half.

"We always go there. No, somewhere new. Somewhere we've never been before."

According to its website Les Perles de Monte-Carlo opened in 2011, and since then several friends have recommended it.

The only excuse I can offer is that it's way out at the other end of town and not somewhere I pass regularly. Its Facebook page is packed with photos of beautiful people and seafood, and the website lists products they serve at table or to take away. I see it includes 'gambas sauvages' but there's no indication as to whether or not they're massive.

The other half and I arrive at the beginning of lunch service. There's a light breeze off the sea, and parasols temper the sun's heat. A basket on the table contains two rolls of kitchen towel and several individually packaged hand wipes. A good sign.

We're right on the end of the jetty at the entrance to Fontvieille Port, with a splendid view of the Oceanographic Museum clinging precariously to the Rock and a regular traffic of boats coming and going. Tables are well spaced out on the quayside, a couple of metres from the sea, with only some large rocks between us and the waves. They provide a marvellous playground on which a seagull practises Statues (2): take your eyes off it for a few seconds and when you look again it's a foot closer.

Listed under the Plateaux are oysters, prawns, rillettes, and gravalax. But look! There, under Planches! Gambas xxxl sauvages. Well, if xxxl-sized king prawns aren't massive, I don't know what are. I ask the waitress just how large are these creatures and to my disappointment she says they only have the normal sized gambas today. She holds her hands about 8 inches apart. Quite big then?

We think about just going for gambas, but the platters are too tempting. Our server recommends ordering those first and calling her back if we want more.

First out of the kitchen are twelve normal prawns, served on a bed of ice with a cocotte of mayonaise. De-shelled and naked they are sweet and juicy. The salmon is dressed with fresh dill and homemade sliced white onions delicately pickled. As for the rillette, it's a plump puck of fishiness with a green salad on the side. To complete the serving there's a basket containing slices of bread, black and wholemeal, and pats of salty butter.

Afterwards we still have a little space to try the massive prawns, one each. They're served split open and grilled, with potatoes, cooked onion slices, and baby tomatoes on the side.

It was a splendid lunch, washed down with a bottle of Pouilly Fume and some fizzy water. By the time we were leaving the seagull had disappeared, but no doubt like us it would be returning. Massive prawns may be impressive but small ones are tastier, and those of Les Perles de Monte-Carlo are most excellent.

1. A reference to British comedian Stewart Lee's stand-up routine in which expats equate quality of life with massive prawns.
2. Statues is a common children's game, which was also no doubt the inspiraion for the terrifying Weeping Angels of Doctor Who's Blink episode.
at September 22, 2022
Email ThisBlogThis!Share to TwitterShare to FacebookShare to Pinterest
Labels: Art & music & misc reviews, restaurants