Flor de Mayo (Mayflower) is the story of a family living in the late 19th century Valencian fishing community. It begins when Tona is widowed by the death at sea of her husband, "the most thrifty saver of all savers," "a fisherman in winter and a smuggler in summer." The resourceful Tona opens a tavern on the beach, using the upturned wreck of her husband's boat as her home and workplace. She raises her two fatherless sons alone, until she falls for Martinez, a handsome Andalusian and a cad. The remainder of the book relates what happens to Tona and her family, their fortunes, misfortunes and adventures.

Vicente Blasco Ibanez paints a vivid picture of the small fishing community where everyone knows everyone else's business. His description of the fish wives and their antics at the market are especially enjoyable, and he dramatically evokes the terrifying, destructive violence of storms at sea. The style is unsentimental and non-moralizing, and the English translation is fine, if a little old-fashioned.

Flor de Mayo is one of four Blasco Ibanez books that depict rural life around Valencia and it's a great read if you're planning a trip to that region of Spain. Although the story is set over a century ago, I'm looking forward to seeing many of the buildings, districts and towns mentioned in the text.

I had a great holiday in Valencia, taking in a celebration of the city football team's victory in the 2018-19 Copa del Rey and a exhibition of images by 19th century photographer Jean Laurent. His photos brought to life many of the scenes described in The Mayflower, including this one of the oxen that beached and launched the fishing boats. 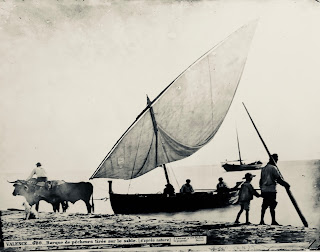