How could I not enjoy Geraldine Brooks's People of the Book, when her dedication states "for the librarians"?

The story is about Hannah, an Australian book conservationist who has been asked to restore a treasured Hebrew codex (based on the real Sarajevo Haggadah). Brooks takes us back through time from 1996 to 1480, revealing a fictional creator of the haggadah in Seville and its various protectors on its journey through Tarragona, Venice, Vienna and Sarajevo. Interspersed with the backwards tale, is the story of Hannah's life, her research and relationships. Some reviewers have said they disliked Hannah, but I found her appealing, and enjoyed the strange relationship she had with her mother.

I bought the book because it's partly set in Tarragona and I had a trip planned in that part of Spain. Knowing very little of 15th century Spanish history, I found descriptions of the Spanish Inquisition methods gruesome and was shocked by the way in which the Jews were expelled. It certainly coloured my viewing of an exhibition of 15th century religious art whilst on holiday.

On the whole, the ending was too contrived for my taste, but I take issue with the many comments that compare the book with Dan Brown's The Da Vinci Code, which I've also read. People of the Book is not at all like Dan Brown's thriller which, if memory serves me, was based on rather dodgy "history". Its "surprise" revelation was easily guessed if you'd read Holy Blood, Holy Grail The Secret History of Jesus, the Shocking Legacy of the Grail. In contrast, Brooks's story is anchored in the intriguing origin and survival of a real thing, based on proper research and benefiting from a foreign correspondent's journalistic knowledge. I also preferred Brooks's theme that, "to be a human being matters more than to be a Jew or a Muslim, Catholic or Orthodox."

After visiting Valencia I made my way to Tarragona and visited the Maricel Museum in nearby Sitges. There was a dreadful dissonance between the horrors of the Spanish Inquisition and the loving message of Christianity and its gorgeous religious art. 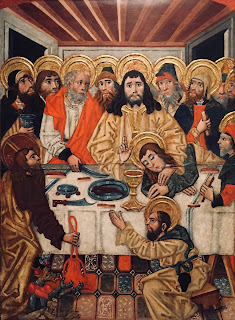