Beach or book? Both 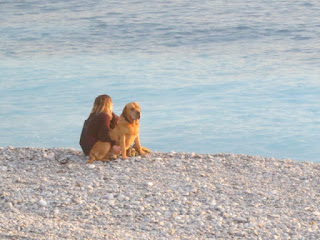 It was an easy choice to make on a sunny Saturday afternoon on the Cote d'Azur. I could have gone to the beach, stretched out in the sun and read the next story in Wayward Girls and Wicked Women. Instead I sat in a cool back room at the Scotch Tea House to listen to a bunch of authors talk about their books. Bliss!

Meet The Authors (3 June 2017) was organized by Margo Lestz as a fringe event during Nice's Festival du Livre. Adrian Leeds directed the afternoon and ensured the seven writers passed the baton smoothly from one to the next. Most of the speakers used their knowledge of the South of France to write a variety of fiction, fact, and memoir.

We discovered Patrick Murphy's Art Lover's Guide to the French Riviera an illustrated book that covers museums and galleries from Draguigan to Menton. He warned aspiring guidebook writers to beware the French copyright laws which make using your own photographs subject to licence fees.

Alice Alech talked about her co-authored The 7 Wonders of Olive Oil, warned us not to become 'potato-couches' [sic] and hinted at the influence of gangsters and racketeers over the olive oil industry.

Curiosity prompted Margo Lestz to take up writing. Why do people exchange Lily of the Valley on 1st May? Why is the cicada the symbol of Provence? Lestz did the research and used it to publish her Curious Histories books and blog, curiousrambler.com.

Attorneys are writers who want to make money according to attorney-turned-author Julia Allen. Her short stories began life as diversions to help overcome writer's block. Nine of them form a self-published book called Facets, some of them macabre, others romantic.

For a longer read Patricia Sands introduced us to her middle-aged coming-of-age stories set in Toronto and the South of France. The self-published Bridge Club was so popular that fans pushed her to write Promise of Provence. A contract with Amazon Publishing followed, and the rest, as they say, turned into a trilogy. Retirement is not an option for Sands. She prefers to think of it as rewirement.

Two writers provided entertainment from their own life experiences. Kristin Espinasse's blog reflects on being the American wife of an itinerant French man, and raising a family. French words provide a daily theme for her writing, a strategy which has attracted not only regular readers to her site, but also the publisher Simon and Schuster.

Our final speaker, Lisa Anselmo, was faced with regenerating her life following her mother's death. She made us laugh with an extract from her memoir My (Part-Time) Paris Life, relating the experience of buying a flat in a foreign country. It struck a chord with more than a few of the expat audience members.

After the presentations the authors stuck around to answer questions and sign books. I left with an armful of reading matter for the next time I'm sunning myself on the pebbles of Nice beach.